[disclosure: I was taken to Berlin for IFA by Haier] 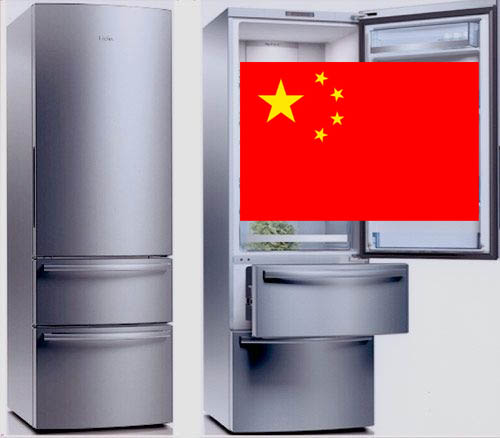 It used to mean something cheap and plastic that played a tune and broke 3 days later. Now we all know that China makes some of the finest gadgets out there.

They make the iPhone, they make LG TVs, they make many of the clothes we wear and they probably make your washing machine too.

But while Chinese companies have the manufacturing muscle and technical expertise to produce the most advanced and most finely-tuned machines in the world, as a country they have relatively few brands. They don’t have design, they don’t have marketing, they just make the stuff.

Well that’s where companies like Haier mark a change – alongside existing Chinese tech giants like Huawei and Lenovo, they signal the next wave of Made in China – Designed in China.

And while they do lots of affordable and mid-range fridges, they do premium stuff. And now they want to be premium brand in Europe and in the US, like they are in China. Maybe you don’t know much about what makes a fridge premium – but we’re talking about smart temperature control, french window shutter drawers, fruit drawers at optimum temperature and of course, those little ice dispensers. Then it’s also about build quality and energy efficiency.

Let me tell you – I saw Haier’s fridges at IFA – they were lovely fridges, with premium-range price tags to match.

Point being – that China don’t just make quantity, it makes quality now. That’s going to be the way of the future. And that’s where they start to challenge the West and change the future of technology.

Moving from white goods to the sexier end of consumer electronics it means that the next Apple may as well be in Shanghai as California.

I don’t see a Chinese phone brand that could rival Apple springing up in the next five years – currently there are none [LG and Samsung are South Korean, HTC is Taiwanese] but beyond that is anybody guess. They’ve obviously got the manufacturing skills already.

And because the home market there is growing, new Chinese hardware companies will have an easier ride starting out than a US or European company. It will be much easier to sell stuff while finding their feet. The market in PCs is pretty static out in the West, relying on replacement only. So much so that the most successful PC company in the US, HP, has decided to stop making them.

The US isn’t a fertile place for the next Apple right now.

But design and branding are two big problems that China face. When I visited there two years ago someone pointed out a parallel case: China make so many clothes – but there are no (significant) Chinese fashion brands. The guy I was talking to suggested that the Chinese education system was partly to blame: it promoted manufacturing skills like attention to detail, and the ability to replicate ideas exactly. Not necessarily the skills need to create bold new ideas or to redefine genres.

Though, in a nation of 1 billion people – can it take long?

One thought on “Made in China? Why the next Apple will probably be in Shanghai”