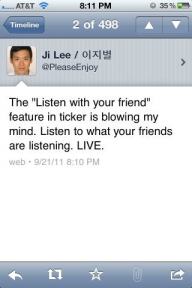 So tonight is a huge one for Facebook as the network reveals what many hope will be a truly revolutionary music service. But do we know what’s coming already? It appears that a Facebook employee accidentally revealed a killer feature of the service.

The “Listen with your friend” feature in ticker is blowing my mind. Listen to what your friends are listening. LIVE.

As TechCrunch reports ‘Within minutes, Lee deleted the tweet, but not before Mitchell Holder grabbed a screenshot. Yes, Lee is describing a key feature of Facebook Music launching tomorrow. Not only will all music you’re listening to appear in the just-launched right-side ticker, there will be a link to “Listen with your friend”, that when clicked, will allow you to listen along to the same song at the same time (thanks to the magic of scrobbling and track matching).’

If this is right then it will be an amazing thing to be one click away from snooping on your friend’s music collection.

One thought on “Is being able to listen to your friend's music at the same time as them Facebook Music's killer feature?”