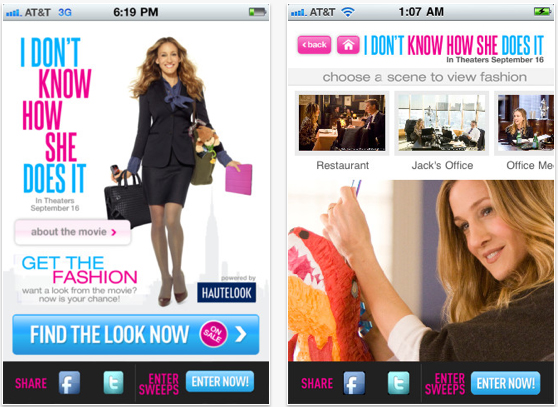 A new iPhone app released in tandem with Sarah Jessica Parker’s new film, I Don’t Know How She Does It, gives users detailed information about how to copy the famous actress’ fashion sense. Which we’re a little undecided about.

But regardless of whether you love or hate, or love to hate SJP, there’s no denying the app IS a good addition to the film. You can browse clothing details by actor, by scene or by look and then find out where to buy everything for (allegedly) cheap and cheerful prices. There’s also plenty of details about the film too, like a round-up of the cast members and a sneak preview of clips and stills.

We’ve seen all kinds of big blockbusters make waves online with clever viral campaigns, but as of yet very few have managed to create apps we’ll actually use that don’t just seem like lame promotional tactics. We’re not sure just yet which camp this app falls into…

It’s just a shame there wasn’t something similar around at the height of the Sex and the City hype, as devoted fans would probably have sold their souls for information about Carrie’s clothing that they could keep in their pockets.

Available from iTunes for Free.