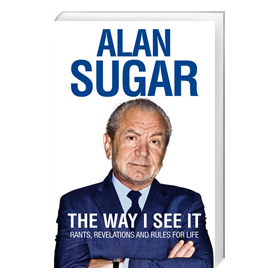 Straight talking entrepreneur Alan Sugar held a book signing today, which is fairly standard for a guy who stars in a reality TV show and loves writing about himself. But this book signing was different because it took place on Twitter.

I know what you’re thinking, a book signing isn’t a book signing if BOOKS AREN’T BEING SIGNED, but it was actually a quirky ploy to get people talking about his new ranty book and I hate to say it, but it seemed to really work.

At 1pm today, Sugar’s one million Twitter followers were urged to go over to http://www.lordsugar.tv/, log in with their Twitter details and then submit a rant, anything they wanted to voice to the masses. Alan Sugar would then choose the best one and sign a book for that user.

It’s essentially just a gimmicky competition, but it’s good to see Lord Sugar interacting with people on Twitter (in a way) and getting them to enter in a way that’s in keeping with the book, which is all about his “rants, revelations and rules for life”.