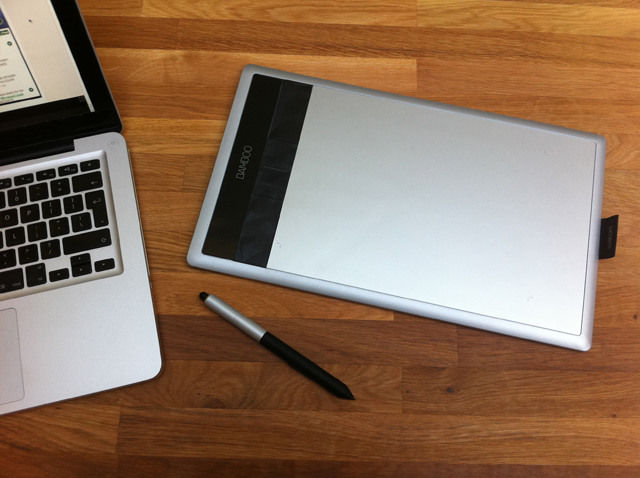 Wacom is well known for its clever tablet and pen solutions, which aim to make all kinds of activities, from sketching to game development to image editing as easy and intuitive as possible.

The brand creates different kinds of interactive pen displays for specialist industries, the Cintiq range for animators and designers and we can’t forget its impressive new Inkling product, which is basically the stuff an illustrator’s dreams are made of, transforming images from ink-to-digital with one small pen.

However, Wacom also has a range of tablet and pen products called Bamboo, aimed at “normal” people who want to move around their computer with ease, annotate their work and dabble in Photoshop now and again. This week the Bamboo tablets have been re-launched, re-vamped and refreshed, so the devices don’t just look much sleeker, but they’re also even more responsive and impressive than their predecessors.

The new range consists of the Bamboo Pen & Touch, a black and lime wireless enabled tablet with a chunky stylus and express keys and the Bamboo Fun Pen & Touch, which is similar but comes with an impressive software suite of Photoshop and Artrage and a very MacBook-esque silver finish.

As I’ve got a MacBook and I’m not too keen on lime green, I decided to trial a medium-sized Bamboo Fun Pen & Touch for a few weeks and although it took a few days to get used to it, I found it made everything much easier and more intuitive. Although I’d like to hold it personally responsible for the fact I spent around five days in total just aimlessly doodling tattoo ideas and eyes.

One of the biggest things to point out about the tablet itself is its super responsive multi-touchscreen with a range of multi-touch gestures that allow you to navigate around your PC or Mac quickly and easily.

The tablet also has a number of “express keys” down the left hand side, which at first I found a bit pointless, but once you’ve customised them yourself they become really useful and can save you a lot of time (well, a lot of seconds).

I was surprised at how slim and lightweight the Bamboo was, so it didn’t prove too much of a pain to slot alongside my laptop while I’ve been on the move.

Oh and let’s not overlook the fact it looks LOVELY, with its streamlined design, subtle silver finish and shiny black edging.

The stylus is really light and although it’s a bit chunkier than a standard ball point pen it is very easy to hold and move around the tablet.

You simply slide your hand a centimetre or so above the tablet to move around the screen or tap it to scroll or click on something.

Just like the tablet’s express keys, the pen has two buttons on its side that you can customise, so it’s worth playing around with them.

In the past I’ve found that sometimes the devices which look and sound amazing don’t really deliver in the long run, or just don’t prove to be very useful on a daily basis.

Although the Bamboo Fun Pen & Touch does take some time to get used to, it makes photo editing and drawing a lot easier and everything else just generally much more fun.

I know a lot of people like to use Bamboo tablets for all kinds of things, scrolling, navigating, writing notes, you can use it for pretty much anything you can think of, especially since its advanced multi-touch screen means that it’s very responsive to all kinds of gestures. However, I’m weirdly content with the MacBook’s trackpad, so for me it was all about the drawing, photo editing and annotating. The surface of the tablet feels smooth, but almost paper-like, so once you’ve got the hang of the pen, drawing actually comes quite naturally.

The Bamboo Fun Pen & Touch comes with Photoshop and what I noticed the most was how working with a pen when I’m editing images as apposed to a mouse makes everything feel so much easier and more precise, going back to my trackpad just won’t be the same :(.

If you feel a little intimidated by the Bamboo at first, then you can play around with a few of the product’s dedicated apps, which let you practice and get used to the feel and rhythm of using a pen and tablet.