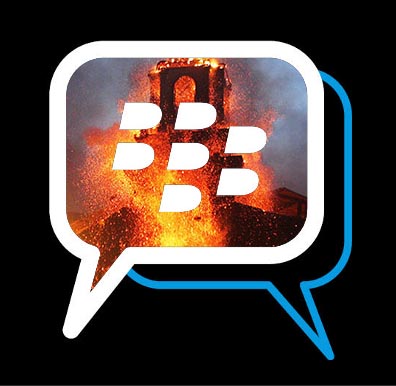 Blackberry Messenger or BBM has been fingered as key enabler of the riots that swept through London this weekend.

Twitter was filled with reports of fires, broken windows and clashes with the police but the key messaging and organising was taking place on the private instant chat service Blackberry Messenger, according to Urban Mash-up.

All apart from a few idiots of course – see this guy posing with his haul of looted goods that he posted on Twitter.

What is Blackberry Messenger?
Intended as a quick instant chat for executives who didn’t have time to send full emails, it’s a fast-moving place for group chat that comes pre-installed on all Blackberries. You add friends by sharing your Blackberry PIN numbers.

Why is it different to Text Messaging?
> It runs off 3G internet so it’s free for starters.
> You can create groups which lets you message lots of people at the same time. Blackberry says: “Connect instantly with personal groups of friends, family or coworkers with BlackBerry Groups.”
> It’s more interactive, you can see when your messages have been read and when your contacts are typing.

Why is it so popular with kids?
Lots of teenagers have Blackberrys – perhaps because they come at more price points than iPhone. Perhaps because Blackberry have a much bigger brand in the ghetto/urban cache with hip-hop stars and celebrities toting the handsets around. See our story: Why are Blackberries so popular with Hip-Hop Stars?
And then, being free, BBM is more attractive to people with less credit – more likely to appeal to teenagers.

How did it play a role in the Riots
The riots weren’t the result of any major organisation, not like the Student Riots last year which had traditional student unions and protest groups behind them. The messenging just allowed news to spread fast. When a critical mass of people were feeling angry enough/saw the opportunity, Blackberry Messenger allowed that feeling to spread fast and let people meet up quickly.

Because Twitter is a public forum, rioters and looters were sensibly wary of bragging publicly about the crime they were committing.

BBM makes it very easy to spread messages to friends, but it needed the public forum of Twitter to put people in touch and tie them up with developments outside their groups of friends. People who wanted information would tweet out their PIN numbers and ask to be put on the BBM groups.

So the two networks complemented each other. Google + would work too – with its huddle and group chat functions – but we think it’s just nerds on there, so little chance of that taking off as a cradle of the revolution.

And then it sounds like the violence was enough to convert the teens who turned up looking for trouble/excitement into active rioters and looters.

Equivalent services for iPhone and Android include WhatsApp but it doesn’t have the same group chat function and culture of messaging around it. 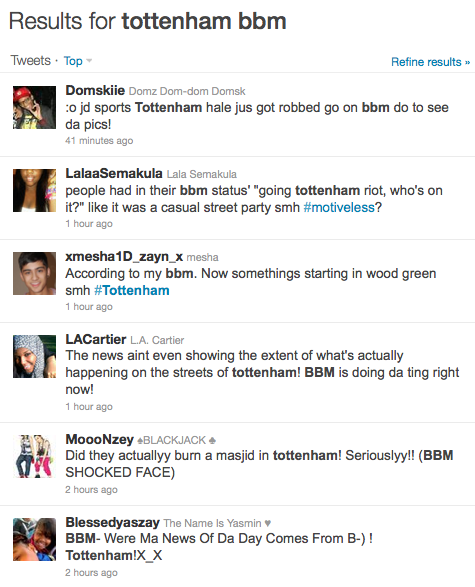 BBM message shown to the Guardian:

“Everyone from all sides of London meet up at the heart of London (central) OXFORD CIRCUS!!, Bare SHOPS are gonna get smashed up so come get some (free stuff!!!) fuck the feds we will send them back with OUR riot! >:O
Dead the ends and colour war for now so
if you see a brother… SALUT!
if you see a fed… SHOOT!
We need more MAN then feds so Everyone run wild, all of london and others are invited! Pure terror and havoc & Free stuff….just smash shop windows and cart out da stuff u want! Oxford Circus!!!!! 9pm, we don’t need pussyhole feds to run the streets and put our brothers in jail so tool up,
its a free world so have fun running wild shopping;)
Oxford Circus 9pm if u see a fed stopping a brother JUMP IN!!! EVERYONE JUMP IN niggers will be lurking about, all blacked out we strike at 9:15pm-9:30pm, make sure ur there see you there. REMEMBA DA LOCATION!!! OXFORD CIRCUS!!!
MUST REBROADCAST TO ALL CONTACTS!!!”