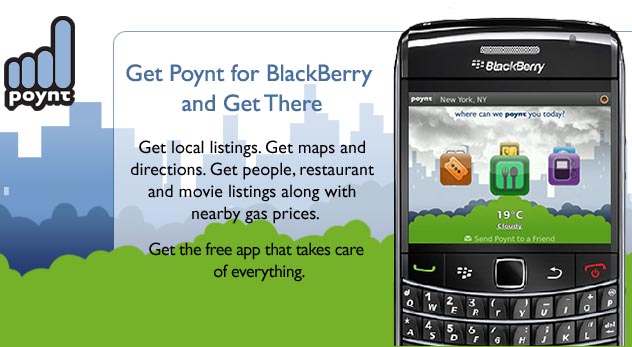 A couple of apps come featured on the new Blackberry Operating System – Blackberry 7. And one of them is Poynt.

I’ll admit straight up, the Blackberry app store is a dark place to me, I don’t hear about many, I don’t know about many. That’s partly my fault, and partly the fault of Blackberry who have never prioritized apps like other platforms, and reportedly are more curmudgeonly than welcoming to new developers.*

But if you’re a Blackberry type and looking for apps, Poynt is one to download. 8.4million people already have (across different platforms – it’s also on iPhone, Android and even Windows 7)

Unlike many others such as Foursquare, Poynt is not some rewrite of an iPhone app. It’s been on the platform since before Blackberry even had apps, working as a local search service on a mobile web page until the app store arrived and it became a fully-fledged app.

Poynt is very functional – a local search service that lets you do stuff too. As they put it:

“Get Reviews. Get Reservations. Get Directions. Get Trailers. Get Listings. Get Tickets. Get There.”

And to be honest, location search is still one of the most useful things your mobile phone can do for you. (Although those apps that put clip-art speech-bubbles onto photos of your friends will always have a place in my heart.)

Poynt is particularly useful on Blackberry because it’s very deeply integrated into the functions of the phone. Dates and reservations can be sent in one-click to your calendar or shared with your contacts.

Partnerships with various other web services let you actually carry out transactions too. You don’t just search for the restaurant, you can book it; same with film or theatre showings.

If you’re sceptical about whether people actually buy things on their phones.. Poynt data suggests they do:
They’ve just hit their billioneth transaction (reservations or bookings) and the average user uses the app nearly every day: making 32 Poynt searches a month.

Some things could definitely be improved.
For example in the US version you can get a list of gas (petrol) stations nearby and compare prices. It would be nice if that came to the UK.

Because Blackberry are locked into a deal with Ticketmaster, there are limits to what tickets you can order through the Poynt app. And similarly their restaurant table booker is subject to the tariffs and limitations of their partner.

Still a very functional and popular app. Oh and it’s free too.

Poynt is free on Blackberry see more about it here

*the developer behind swedish app bambuser told us so anyway..