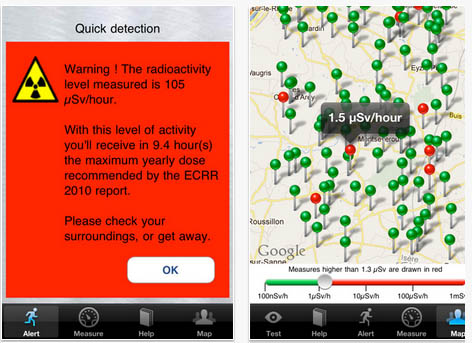 Don’t go waving your iPhone at nuclear power reactors or anything, but there’s now an iPhone app that lets you measure radioactivity. Intended for civilian use in the case of a nuclear reactor meltdown (nice eh?) iRad app can tell you when YOU ARE IN DANGER AND NEED TO RUN.

It won’t protect you from it, it won’t stop you getting bitten by radioactive spiders that turn you into hybrid mutants, but it will let you see on a little map just what the ambient radioactivity looks like. The sort of thing you might want to know in the case of NUCLEAR DISASTER.

iRad is not quite a Geiger counter but the app works in a similar way by counting interactions of radiation as it crosses the surface of the camera chip.

“The application contains a proprietary algorithm which detects gamma and X rays passing through the iPhone back side camera chip. The number of hits per time unit is then used to compute the ambient radioactivity level.”

It’s all displayed on a nice map and you can see the data other people have collected:

“All measures are collected along with their geographical location, and contribute to building a world-wide radioactivity map that does not depend on official or governmental data or authorization. Measures are shown on a most-recent first basis, and are displayed in red or green, depending on a threshold value that is easily set by a slider – this facilitates analysis of the data and visualization of the ‘hot points’.”

iRad works best of all when the radiation is strongest, though you might have to wait a little while before you get the results back:

“The detector yield is lower than for a dedicated sensor, so measures take longer (up to one hour). The accuracy increases with the level measured, and it is good enough (20%) when ambient radioactivity reaches a dangerous level.”

It’s from a French company MSS who say they specialize in innovative, mixed mobile/server solutions.

It’s pricey though – that gamma particle detecting software doesn’t come cheap. But do you want to grow an extra leg or not? Nice to know what you’re up against when nuclear Armageddon strikes. :)