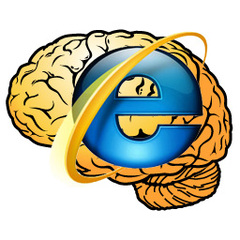 Okay you Chrome and Opera users – time to climb down off your high horse. Looks like the story doing the rounds yesterday that users of Microsoft’s Internet Explorer browser are less intelligent than the rest of us was a A BIG OLD LIE.

The “IE users are dumb” story ran on the BBC (becoming the most read story for a stretch), on CNN and The Daily Mail among others.

Claiming to be based on a survey that asked 100,000 people what browser they used and then measured their IQ, it came up with the suggestion that users of Internet Explorer version 6 had an IQ around a seriously subnormal 80+

But turns out that the research it was based on was just a hoax. The company behind the research ApTiquant had made it up.

Why is not exactly clear, but it’s likely that ApTiquant which sell online employee assessment forms just wanted some publicity and incoming links. Presumably going by the mantra that all publicity is good publicity.

The response to the story -fake though it was – showed that it’s a touchy topic. So we’d like to stick our oar in and contribute to the scientific literature on the topic by doing a one of our methodologically rigourous ShinyShiny Polls.

What do you think? Are IE users less intelligent than their Firefox/Safari-using counterparts? Let’s sort this out once and for all…