It has been top of the news agenda in the UK for the past week, but News of The World hasn’t been trending on Twitter, since well, the scandal properly broke last Thursday.

Tweeters watching the flood of tweets on the #NOTW hashtag have questioned why it hasn’t appeared in the list of UK trending topics, while lesser stories like
the transfer of footballer Jonathan Woodgate made the trending list. See our little Tweetdeck experiment below that shows that there were more tweets about #notw than about Jonathan Woodgate (you know how the length of the little scroll bar shows how long the column is? It’s longer on the Woodgate column, proving that there are fewer tweets in it. It’s easy to tell that from watching the columns and seeing which updates faster – but I can’t video-grab my screen unfortunately.) 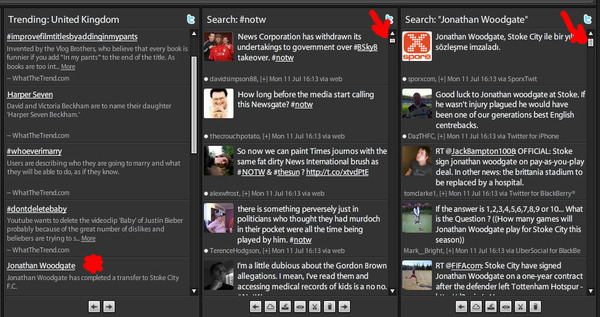 There were more tweets about Victoria Beckham’s new kid than either of them, but that’s to be expected we suppose.

Being Twitter – conspiracy theories have abounded – is Twitter in the pay of Murdoch and suppressing the hashtags?

But no – Twitter trending topics aren’t the most popular topics on Twitter, they’re the fastest accelerating topics – a tweak Twitter made last year to stop Justin Bieber topping the trending list all the time.

The likelihood with #notw and Rupert Murdoch is that there has been a steady stream of tweets about those topics for a long time. But it won’t be until the number of tweets rockets off that #notw or another Murdoch-related hashtag will make the cut into the trending topics list.

The same issue cropped up with Wikileaks last year, when it failed to trend despite being the huge story on the internet.

One thought on “Why #NOTW hasn't been trending on Twitter”