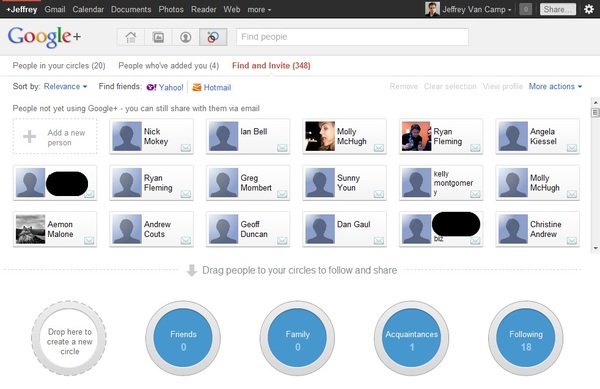 I know – five days ago I was writing about how the ability to sort your friends into Circles was a massive winner for Google+. But now, after a few days of sorting my friends into circles I’ve decided it’s Not Such An Incredible Thing After All.

The ability to group friends has been sold as a big advantage of the network by Google itself – Circles is the first feature mentioned on the introductory page and the facility was bigged up by the Google execs interviewed about it in this Wired article. But in practice…. I don’t feel it.

After trying it out a bit, I’m not sure I either need – or want – to group my friends.

To be fair I only have five friends on there right now and they could all be put in one circle: “Nerdy People Who Bagged Google+ Invites Early Because They Go Crazy For That Kind of Thing”.

But it got me thinking. The suggested categories are Friends / Family / Colleagues. You can create new groups yourself of course, but as it sits, I think the groups overlap too much to be particularly useful. I mean, my sister would go in both Friends and Family, Gerald at TechDigest would be in Colleagues and Friends and well, the rest are friends too so they’d all go in Friends. The day my mum gets on Google+ I’ll put her in the Family Circle, but I don’t think she ever will.

I can’t think of many more meaningful distinctions here with the people I know.

I think Facebook have got it right in realising that there’s only one circle that really matters – the people I’m actually interested in. Then there’s a broader group of people who I feel warmly towards and will click on from time to time. But I don’t have to go through dragging and dropping them into groups. Because for starters, I can’t really think what groups I’d put them in. And maybe I’m interested in some of their stuff – that picture that got 10 comments, but not all of their stuff – a music video I’ve already seen.

Facebook works it out for me with their news feed filter and – yes – they do a pretty good job.

And I also think that – like it or not – Facebook has changed the definition of “friend”. It’s flattened it out into “a general bunch of people you met and liked at some point”. I don’t mind if any of my random friends sees that hamster video I just shared. But then I sincerely doubt all of my 500 friends would see it anyway.

Let’s consider this properly: the numbers on Facebook get misused a lot. Though I may have 500 friends on there, I’ll only see the updates of 30 at most, and will only go out of my way to check the profiles of 15 or so. I imagine only about 30 people will get my updates, so only about 30/500 will see that hamster video from my wall. And that’s probably optimistic.

Most people know this and update Facebook accordingly. I write for the people I know might read it. I just assume people who don’t care won’t see it. Unless you’re a celebrity of some kind, people don’t usually go out of their way to check up on all your latest news.

But I don’t know. Maybe it’s just not working for me because I haven’t got enough friends on there yet.

Sparks and the +1 button do interest me though. I think that for me Google+ will be best as a links stream and a place to store and share interesting stories. I like it and I want to use it, but the friends grouping just isn’t a winner.

What do you guys think? Any reflections on Circles?

Related: What Pulp Fiction would look like if it happened on Google Wave: Amazing