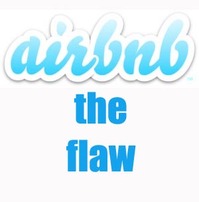 I’m not a business analyst, but from a user’s perspective, this is the problem with the business plan of AirBnB: the crowd-sourced rent-out-a-room for travellers website, just valued at $1bn.

The problem? It will become a victim of its own success.

We used Facebook to ask for an apartment in New York, and a friend pointed out a friend of his who has a profile on AirBnB for renting out her sitting room. So yes – I did look at AirBnB and it was really useful to browse through pictures of the room and information about it on the well laid-out site.

But when we messaged her on AirBnB, she sent us her email address and told us to deal with her through that so we could cut out the AirBnB charges that they levy on payments.

So in the end, though we used AirBnB as a reference, no money of ours passed through it.

The apartment was nice, it all went fine, and when we left she said we should recommend the flat to any of our friends from London and told us to get them to email her rather than go through AirBnB. Again – to avoid the fees.

You get what I’m saying. The more successful it is at putting people in touch, the more people are likely to skip using it.

People will use the nice layout of AirBnB to window shop for available apartments, and then carry out the transactions elsewhere – just a simple PayPal transfer over email.

I know AirBnB offer reliability ratings, which is a good thing, but I’d trust a friend’s recommendation over an AirBnB rating as well.

The networks can then be sustained over Facebook and email.

I’m just saying, a bit like people who go to PC World to browse gadgets, but then go home and buy them on Amazon, if Air BnB is successful, it will start to take its own business away from itself.