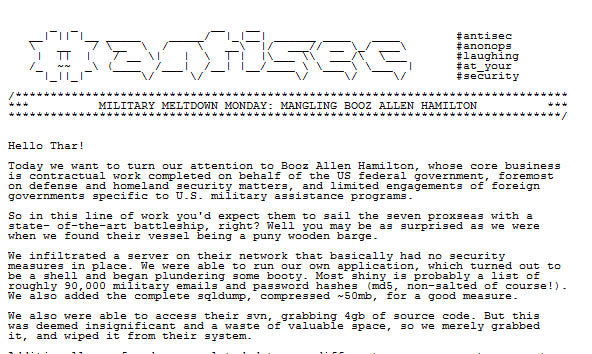 We knew they wouldn’t stay quiet for long..

Anonymous have been accused of stealing data from US military contractors Booz Allen Hamilton – and then posting it on PirateBay. 90,000 e-mail addresses plus passwords, logins and other information were taken and posted on the public site.

Anonymous claim that the theft -termed Military Meltdown Monday – was a stunt to prove how weak the data privacy in place was – clearly a painful irony for a company that specialises in defence.

One of the goals of the AntiSec movement – founded by hacker groups Anonymous and LulzSec is to expose poor data privacy in big organisations. However, of course, it’s a point that could be made in different ways.

In a document on the piratebay page, Anonymous list a series of other reasons they have singled out Booz Allen including an allegation that a U.S. Department of
Homeland Security contract with Booz Allen increased from $2 million to more
than $70 million through two no-bid contracts.

Arguably these guys have concerned about American governments, once again though, Anon are operating as the prosecutor, judge and jury with no regard for the people caught in the crossfire.