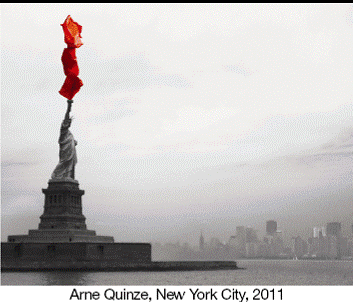 An artist has stuck a giant plume of orange silk on top of the Statue of Liberty’s torch – but you can only see it when looking through your mobile phone. It’s an Augmented Reality artwork – which means it doesn’t actually exist.

Or it does – but only on your phone. Or in your perception, or something.

It involves 30 artists in 9 cities including Nick Knight, Hussein Chalayan and the Statue of Liberty artwork launched today by Arne Quinze.

It’s not surprising artists are lapping up Augmented Reality – it’s visual, high-impact and very much about the aesthetics. AR has also been a hit with the fashion industy – in catwalk shows, in pop-out magazine covers and in advertising campaigns see the Macy’s Magic Mirror.

One thought on “AR Art you can only see through your phone: Nick Knight, Hussein Chaylan & Arne Quinze”