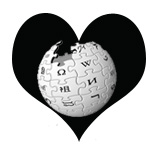 A love button sounds kind of rude – but it’s not. Its Wikipedia’s new way to motivate its team of volunteer editors who feel increasingly taken for granted.

Instead of being treasured and praised as knowledgeable people who are generous with their time, Wikipedia writers and editors have come in for much more flak than praise as time has passed with their work being taken for granted and most comments being negative or critical ones.

So – yes – it’s Wikipedia’s own version of the facebook “like” button. But it’s not a sharing tool in the same way, it’s more like the free doughnuts in the canteen – it’s about staff motivation. But I’m afraid it might not quite work…

I see people liking/loving the Wikipedia pages of things that they like anyway – cats, Patti Smith – rather than necessarily stuff that demonstrates a great command of detail or incredible editing skills. Though I hope I’ll be proved wrong.

The red heart button will appear at the top right of all Wikipedia pages and will allow you to send a positive message to the creators and editors of the article. You can customise your message by sending a barnstar or a virtual beer, or cat.