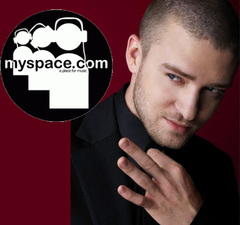 Did playing the guy from Napster in The Social Network film make Justin think he really is a web 2.0 entrepreneur? Well anyway, he’s one of several stake holders who has bought MySpace from Rupert Murdoch’s News Corp at a massive reduction from what it sold for 2006.

News Corp sold MySpace last night for only 6 per cent of the $580million they paid for it in 2006. The buyers are a Californian digital ad agency called Specific media who bought it for a reported $35million. Justin Timberlake is reported to have a stake in the business.

He will play “a major role in developing the creative direction and strategy for the company moving forward,” the company said.

It sounds like the site will refocus on the music element, though no news yet on that post-modern logo of theirs.. Other changes promised in the press release are:

Timberlake had these inspiring words to say:

“There’s a need for a place where fans can go to interact with their favorite entertainers, listen to music, watch videos, share and discover cool stuff and just connect. Myspace has the potential to be that place,” says Timberlake. “Art is inspired by people and vice versa, so there’s a natural social component to entertainment. I’m excited to help revitalize Myspace by using its social media platform to bring artists and fans together in one community.”

Related:
Shiny Poll: Going Back to MySpace – the Pros and Cons
Why the challenger MySpace should be worried about is SoundCloud, not Facebook..