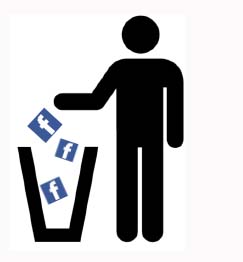 Significant numbers of Facebookers are deleting their accounst, said a report on Inside Facebook, which also claimed that new members weren’t signing up in the numbers they used to.

6million US users deleted their account last year along with 100,000 Britons

The pace of new users joining the network is slowing down too, showing below average rates for the past two months. During a typical month in the last year, 20million new users were creating Facebook accounts. But in April, this figure dropped to 13.9million and in May, the number of new sign-ups fell to 11.8million.

Is it a temporary blip? or has Facebook hit a peak?

Of course – Facebook faces certain statistics ceilings – the number of people in the world with access to computers is limited for starters. But more than slower growth – it’s the current users getting bored that Facebook should be worried about it.

From personal experience the Facebook Fatigue phenomenon does seem like a real thing – though from what I’ve seen it’s friends never updating that seems to be the real issue, rather than people deleting their accounts.

The rise of Twitter could be to blame for some of the traffic loss. But Twitter is still a minority pursuit. And only a minority of that small number are particularly active on Twitter..