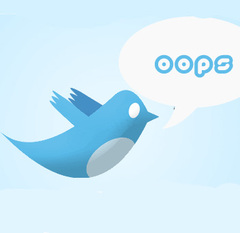 News today that a single tweet has lost a PR company its biggest client got us thinking about other tweets that have cost their authors dear..

Redner Group lost their account with games manufacturer 2k yesterday after threatening to withold game samples from critical reviewers. The tweet from the @TheRednerGroup account read: “too many went too far with their reviews. We r reviewing who gets games next time and who doesn’t based on today’s venom.”

Though the tweet was quickly deleted, 2k terminated their contract in a day. Oops. They’re far from being the only ones.

Here are five other tweets that got their writers into big trouble:

1) The man who threatened to blow up Nottingham Airport on Twitter – and then got arrested. Paul Chambers was taken to court for making what he described as a joke. The anti-terrorist police didn’t see it that way.

2) The intern at UK furniture brand Habitat, who used popular but unrelated hashtags on the Habitat Twitter stream to draw more attention Habitat offers. Tags included #iphone and #iran – bringing criticism on the company for profiteering off the Iranian protest crisis

3) The Twitter user who outed the alleged holders of British Super-Injunctions – is in some serious trouble when they work out who s/he is.

4) The American senator Anthony Wiener who posted a picture of his (covered) erection on twitpic.OOPSIE.

5) Courtney Love – she’s already been sued for libelling a fashion designer on Twitter, but now she’s gone and done it again and has another lawsuit pending thanks to a tweet about her ex-lawyer.

THE MORAL OF THE STORY: Think first, tweet later…