Ebay has complained to Ofcom about the shoddy state of mobile broadband coverage around the UK. It keeps the people from spending, says the retailer, and stifles economic growth in the process.

Apparently eBay’s beef is with places like rural Wales and the Scottish highlands, or the 16% of the UK which is an “m-commerce non-spot”, according to research commissioned by eBay. Mobile spending is at least 20% under the national average in these areas – after all it’s hard to spend on your mobile if you can’t get a decent signal.

It won’t be cheap, getting coverage to remote areas with few mobile subscribers, and this has been the reason it hasn’t been done yet. Ebay reckons UK retailers would be earning £1.3 billion more a year if mobile connectivity were better. We haven’t seen the full study so we don’t know how this number was reached, but we feel confident in thinking not all of this will be coming from the Scottish countryside. After all, only just over a quarter of people in the UK have smartphones, so coverage is only one part of this equation.

… What comes first, though, the phones or the network? It’s the chicken and the egg, folks.

[Smartphone ownership stats as of August 2010, via Ofcom] 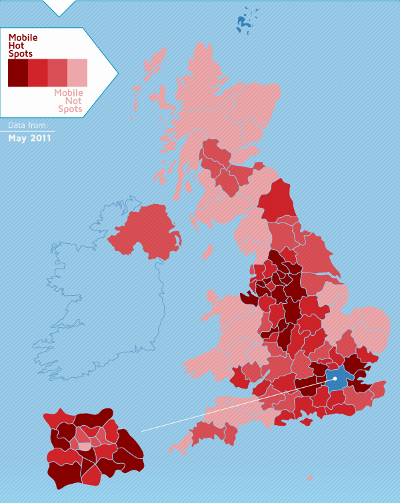