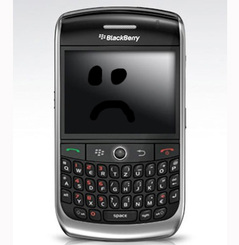 It’s beloved of businessmen and celebrities but looks like the iconic smartphone is losing ground.

We’ve seen the buzz die off in the tech press for a while, but the impact is being felt in real world too. Blackberry posted the first quarterly fall in sales since 2005, saw shares drop by 15% and has laid off staff.

The Torch – their flagship recent handset – was widely seen as a disappointment. Including a touch screen and the standard Blackberry QWERTY-pad it fell between two stools and neither experience was really optimised.

Android and iPhones have eaten up swathes of smartphone traffic, looks like Blackberry is finally starting to feel the bite.