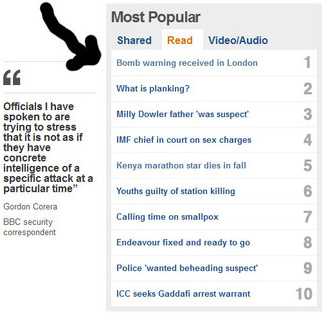 Just a quick post on this: I just got an email telling me that citizen journalists had broken the London bomb scare story this morning (currently the most read story on the BBC website) well before the mainstream media got onto it.

It’s true, in a way: the bombscare happened at 9am, and shut down The Mall, the road between Buckingham Palace and Trafalgar Square and people nearby were reporting it on Twitter and local news sites, like Blottr. Turns out the police picked up a threat from Irish republican dissidents and cleared the area then blew up a suspect bag in a controlled explosion. The big sites – BBC, the newspapers didn’t get onto it till about lunch time.

The people who do the PR for Blottr sent me a mail to say:

“‘Citizen Journalists’ took to people-powered news service www.Blottr.com to break the story online at just after 10am this morning, posting images of the controlled explosion of a package by a bomb disposal unit.

“The story has been otherwise widely unreported, but the below link is proving useful in distributing news across social media platforms, especially Twitter, with many making travel decisions based on it: http://www.blottr.com/bomb-scare-trafalgar-square

I see what they’re saying. But was this such a big story – or was it really a middling-to-small story amplified by the London twittersphere?

It’s hard to tell sometimes what is a big story. If you’re in the middle of something, it’s big to you of course, so of course that’s why people in London tweeted about it. But this is the problem with citizen journalism – some areas like central London where there are lots of people with smartphones will get extremely well-covered and news in other areas won’t get covered at all.

Essentially, there was a threat, a road was shut down and there was a controlled explosion. A similar thing happened on Tottenham Court Road (north london) a few months ago at lunch time, also with a controlled explosion. This is the sort of thing that happens in Belfast, relatively frequently, but the incidents rarely make it to the national news. Take the discovery of a genuine 500lb bomb last month.

Arguably the London bias of Twitter users gives undue prominence to stories from there. And if it doesn’t disrupt key Twitter people on their way to work, it doesn’t get much coverage on Twitter. Mainstream media shouldn’t just rely on what people on Twitter – or Blottr – are making a fuss about.

Obviously the big sites have picked the story up now, but note that the scare isn’t big front page news on the BBC, it’s a local story. Lots of people wanted to read about it – hence it topping the most read charts, but I think most people would want to read a story on the BBC with London bomb in the headline. It still doesn’t mean it’s the most important story.

I’m glad it got picked up and reported of course, I think that’s really valuable, but don’t think it deserves the prominence it has..