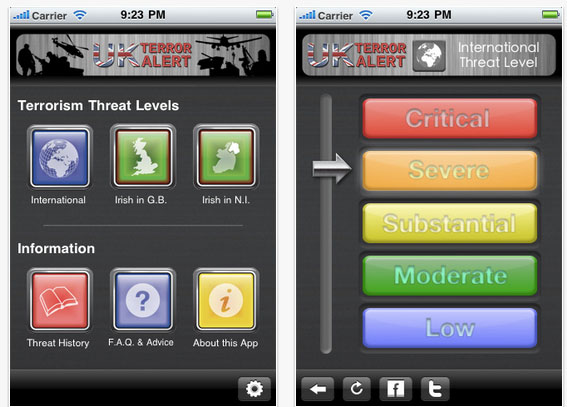 Worried about a terrorist backlash after the Osama assassination? Well, there’s an app for that…

The new UK Terror Alert iPhone app from Raaza sounds well-intentioned and everything, but we’re just not sure that having on-the-go access to the UK’s Terrorism alert on our iPhones will actually be that useful for those of us who live and work in this country.

I think what we really need is world peace and greater global equality.

Anyway, the release claims that the app is: “the most important iPhone utility for combating the threat from terrorism.”

I suppose it doesn’t face much competition. Most iPhone apps focus on making your photos look hipster, helping you find nearby bars or pranking your friends by simulating Alan Partridge’s voice when you call them.

“UK Terror Alert is the only iPhone app that gives you access to the UK’s national terrorism threat levels.”

Interesting amid all this hype about Muslim terrorism that Northern Ireland is still the most threatened place in the UK, according to the Home Office Stats from which the information from this app are drawn.

One thought on “Terrorism? There's an app for that…”