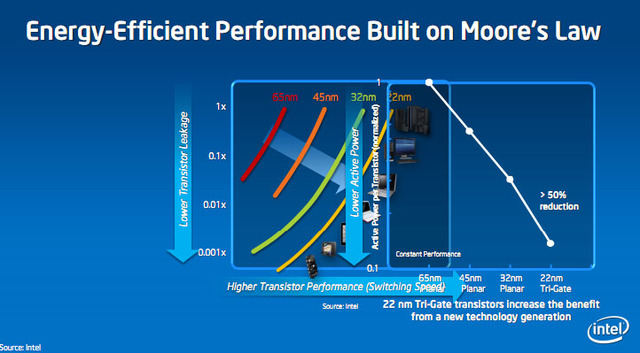 Intel pulled a ground-breaking chip out of the bag yesterday by releasing a 22nm transistor that will power a leap in the performance of mobile devices over the next few years.

One smart little tweak to their existing transistor has doubled its performance and reduced the amount of power it requires. The brainwave was to make the gate the electrons pass through three dimensional instead of two dimensional.

So it looks sort of like the illustration below. 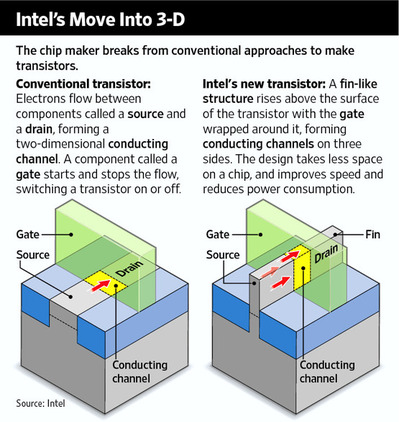 At constant power the new chip makes for 50% better performance than its predecessor, at low power it can do the same job with 37% less energy.

Intel said that the new 22nm transistors have “an unprecedented combination of power savings and performance gains.” And we can expect microprocessors built on them to crop up in everything from phones to supercomputers.

“The performance gains and power savings of Intel’s unique 3-D Tri-Gate transistors are like nothing we’ve seen before. This milestone is going further than simply keeping up with Moore’s Law. The low-voltage and low-power benefits far exceed what we typically see from one process generation to the next. It will give product designers the flexibility to make current devices smarter and wholly new ones possible. We believe this breakthrough will extend Intel’s lead even further over the rest of the semiconductor industry.”

Moore himself – one of the co-founders of Intel in 1967 commented on the discovery:
“For years we have seen limits to how small transistors can get,” said Gordon E. Moore. “This change in the basic structure is a truly revolutionary approach, and one that should allow Moore’s Law, and the historic pace of innovation, to continue.” – Gordon E. Moore

It’s a helpful coup for Intel who are currently losing ground to ARM in the battle to make chips for the mobile market.