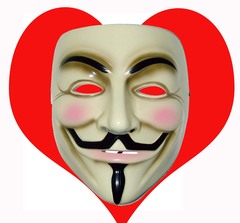 Forget the Navy Seals – hackers are the real heros. Hacking group Anonymous were credited with bringing democracy to the Middle East by Al Jazeera.

According to the report, Anonymous members were behind attacks and attempts to revive the internet when the Tunisian and Egyptian governments shut them down.

It’s a story I hadn’t heard before, but it signals a shift in perception of the hacker group.

Of course we haven’t quite brushed their association with that little affair of the Sony credit card details under the carpet (Though of course it’s just a rumour that Anonymous are involved…) But I was impressed to see how quickly their philosophy had been picked up.

I must say I have a soft spot for them – the greasy-haired heros of the revolution. Of course, crime is WRONG and all that, and I don’t get why they waste so much time on the Scientologists. But in the abstract they have a seductive revolutionary thing going on..

How do you lot feel about them?