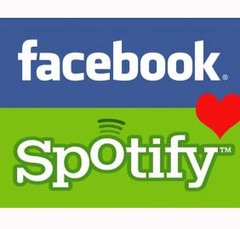 Music service Spotify is rumoured to be closing a deal with Facebook that will see the music player deeply embedded in the social network. Spotify icons would appear on the homepage of every Facebook user and Facebookers would be able to browse, listen to and share Spotify’s 10million songs.

Spotify has been making some big changes lately – cutting its free service & letting people download music onto iPods and phones – but this is a bit of a thunderbolt.

Having Spotify as a browsable music library for Facebook would cement the new “we’re a music discovery service” spiel from Spotify. It meant that when you heard a cool new song you could post it on your friends’ walls, they’d be able to listen to it, and yes – buy it if they wanted to. It makes Spotify the default Facebook music player. You could share a Youtube video too of course- but Google own that, and well it doesn’t really monetise in the same way.

Could the deal breathe new life into the Spotify Free model? We’d like to think so. Facebook has a potent network of advertisers for starters, and even if Spotify doesn’t get a direct cut of Facebook advertising, it offers advertisers much more information about who they’re targeting. And having the Spotify icon on the home page of Facebook is a massive coup that will drive loads of people to the service. Perhaps more users would mean more ad revenue = more free music.

I mean if anyone knows how to monetise a completely free service – it’s Facebook.

I could see listening time being limited on Facebook. But I just can’t imagine a service on Facebook cutting you out for listening to a song more than 5 times. Maybe this much hated feature of the new Spotify

People talk about music all the time on Facebook – it’s a very natural pairing for a site that aims to be a hub for interests and entertainment. Spotify Social – the current Facebook integration that lets you share friends’ playlists – is one of the best uses of Facebook Connect that I’ve ever seen.

It would square Facebook up to Apple more by providing a very potent rival to iTunes with enormous reach.

Expect an announcement in two weeks.. though only in the countries where Spotify is currently available.

Related: Spotify Explain: Why we cut the Free Service..