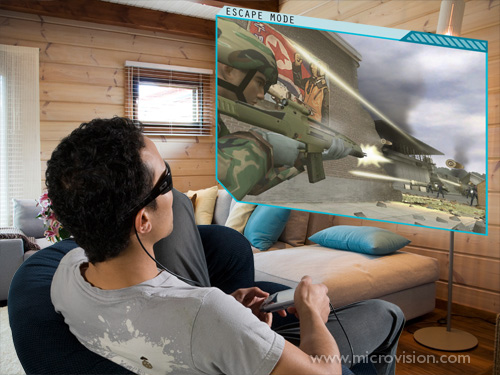 The new Wrap 920 video eyewear from Vuzix promises to take the game off the screen and fill the room around you with it.

If you want a really immersive gaming experience then this new video eyewear is something you should check out. Okay so you’ll hardly forget that you’re in the sitting room, but it’s a step on the way to much more complete experience..

Compatible with 100 popular PC games including Batman: Arkham Asylum, Call of Duty, GRID and World of Warcraft – the Wrap 920 VRs will actually “place” you in the game.

Vuzix make video eyewear with two tiny screens embedded in each lens. Having the screens so close to the eye allows for a panoramic effect with the image appearing much bigger than it actually is. They do an augmented reality version too – with a tiny camera embedded into the frame of the glasses.

These new gamer glasses- the Wrap 920 VR bundle – are special because they have two new features:

1) Head-Tracking: This feature lets the game surround you. Turn your head around and you’re able to see what’s behind you in the game, look to the left and you’ll see what’s on your left. Vuzix explain: “The tiny Wrap Tracker 6TC provides ‘virtual’ presence for first person games including action / shoot ’em ups, driving games and simulators. Less than the size of a penny, this device clips discreetly and securely into the eyewear and enables the wearer to be ‘placed’ within the game. Using the latest in magneto-resistive sensors, accelerometers and gyro’s the Wrap 6TC offers high accuracy head tracking.”

2) 3D video – it uses stereo images to render three-dimensional video. That means that not only is the game all around you, but it’s projecting into three dimensional space.

Paul Travers, CEO Vuzix Corporation, said, “The Wrap 920 VR bundle adds a unique 3D ‘in game’ element for PC gamers. When you hear the enemy coming up behind you, the ability to physically turn your head and view them or to be able to view the complete landscape of the game play zone offers the player a unique advantage over their game opponents.”

As with all these experimental gadgets, the actual user experience can be a little jumpy. And yes – I imagine this isn’t great for your eyes, so you probably won’t want to be doing this for 4 hour stints. Still, it’s an interesting toy for the big gamers out there. 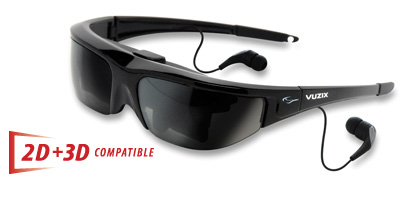