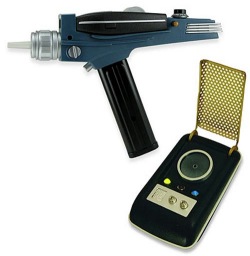 In spite of my personal status as a shameless Trekkie, I appreciate not everyone is as into the geeky stuff as I am. But even those misguided folks out there who fail to worship at the altar of Roddenberry will still appreciate the excitement of the technologically augmented future. Even Stephen Hawking once said it: “The physics that underlies Star Trek is surely worth investigating.”

Progress is taking place all the time, such as yesterday’s announcement that computer scientists are working on gadgets that can feel regret. Apparently, an understanding of this basic human emotion would make computers better at predicting the future, the Google-funded scientists think. To measure the distance between the desired and actual outcome, the computer could become better at minimising this gap, which is in essence a way to measure regret.

While the boffins are pondering away at the robot brain, we take a look at how things are progressing with a few technologies which may well just make the world a bit more like life on the starship Enterprise.

1. Replicators
“Tea, Earl Grey, hot.” You tell’em, Captain Picard. On the Enterprise you simply tell the replicator what you want and it makes it for you. Wonderfully simple, isn’t it – no more cooking – and the replicators even make other things too, like clothes and books. Captain Janeway of the starship Voyager somehow managed to keep burning her replicator food though, so clearly it’s not foolproof. The same is certainly true for the first efforts from a team at Cornell University in the US, which have been working with 3D food printers. Foods are made into pastes, which are carefully squired through nozzles to create little food “sculptures”. Not quite what the Captain ordered, but it’s a start.

2. Robot skin
Artificial skin that can feel touch – that’s a stretch even for the Star Trek universe’s favourite android, Data. He got it in the end, courtesy of the Borg Queen, but it’s possible researchers at Stanford University could beat her to it. Ultra-sensitive electronic skin is currently under development, and this highly sensitive skin should even be able to detect disease markers.

3. Universal translators
The aliens don’t all speak English on Star Trek, that would be silly. What’s happening, you see, is that the communicators all have incorporated an universal translator, which helps our heroes understand what’s being said. Here on earth, there are already several mobile phone apps that will translate text for you, but Google has recently launched an app which does this orally. If you speak into your phone, the app will translate into 15 languages if spoken, or 50 if written. An excellent beginning.

4. Holodecks
On the Holodeck, our heroes can step into a completely different world, programmed to their specifications. This means the opportunity to visit the past or a holiday destination, and then there was that time Tuvok, Voyager’s Vulcan resident, underwent the “pon-farr” in the depths of space and had to seek a little, eh, relief. 3D technology is coming along rapidly here on earth, with the visual effects becoming increasingly better. The touch-and-feel part of virtual reality is yet to manifest, but give those 3D film buffs some time and it may well still happen. As the first 3D porn film opened in China last weekend, maybe some clever producer will take a leaf out of Tuvok’s book?

5. Communication
We’ve come very far on this one already, in fact there isn’t much of what they have in Star Trek that we don’t have available to us now. We have widespread use of mobile phones and the ability to make video calls sorted. The only thing missing here is to make the communicators cuter and more intuitive – get rid of the buttons and get it all done by voice, for instance. Judging from all those ads for Google Voice around town right now, that shouldn’t take too long.

6. Computer interface
Increasingly better touchscreens are coming along like speeding bullets, and with speech control now high on the agenda, it seems like computer interfacing is fast approaching Star Trek levels. But we can still get better; for example Tobii Technology has developed a tracking technology that means the computer will be able to follow the movements of your eyes. This means scrolling pages once your eyes reach the bottom of the document, and looking at points at the screen constitutes clicking. Lenovo has already created laptops with this technology.

7. Tractor beams
The Enterprise can drag objects in space – now it’s looking like we can soon do this in real life too. Granted, it only works with very small particles so far. Basically it works because the light falling on an opaque object is reflected back in the direction it came from. These bouncing photons will then push the object, moving it away from the light source. This is the opposite of what happens in Star Trek, where the tractor beam pulls, not pushes. Researchers at Fudan University in China are working on pulling beams, however, thought to be possible because the light waves in question also contain electric and magnetic fields. This means the particles can be excited to emit light, reversing the direction.

8. Phaser guns and photon torpedos
“Set your phasers to stun,” said Captain Picard – those phasers could evaporate someone too, but did the Capital ever authorise that setting? Oh no. The technology itself may well be possible, but the problem is the energy requirements, and the resulting massive size. A US company has patented a design using laser light, and could potentially be on its way to create a working phaser. The patented laser generates a path of ionised air between the weapon and the target, acting as a conductor for electricity which can stun the victim.

9. Faster-than-light speed and time travel
“Warp” speed is a key obstacle for any Star Trek-resembling reality. Time dilation is a problem for real-life scientists, whereas the Enterprise whizzes along at light-speed without any problems occurring. Time travel is also possible in the Star Trek universe, although highly frowned upon and violation of the Temporal Prime Directive got Capital Janeway into trouble more than once. Thinking they know better, researchers at Vanderbilt University have started tinkering at the problem, believing they may be able to use the Large Hadron Collider to send a type of matter called the Higgs singlet into the past. There are some problems, however: it is not yet certain the Higgs singlet actually exists.

10. Beaming technology
“Beam me up, Scotty.” This one may be the neatest – the ability to move things in the blink of an eye. Bye commuter trains, hello daytrips to Kiwi. Also here we are making progress; yesterday researchers from Japan and Australia announced they had successfully teleported waves of light. In the first instance, this could revolutionise information transfers, but we are hopeful. Oh and while they are at it, someone should look into making a Sonic Shower, which cleans without water. Now that’s time-saving for you.