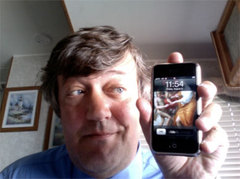 Stephen Fry has said he will risk prison to protect people’s right to banter on Twitter. He waded into the ongoing appeal of Paul Chambers, the man who faces prison under terrorism charges because he tweeted his anger about the closure of Robin Hood Airport in Doncaster.

In January 2010 Chambers tweeted: “Crap! Robin Hood Airport is closed. You’ve got a week… otherwise I’m blowing the airport sky high!” a comment that has been described by Fry as an “example of Britain’s tradition of self-deprecating humour”. According to Paul, it was made in jest out of frustration when the airport was closed due to snow, but the police thought differently and in May 2010 he was found guilty of sending a menacing electronic communication and fined £385 plus £600 in costs.

The case has big implications for what people can and can’t put on Twitter which is why celebrities like Fry have wanted to be involved in the campaign.

Fry attended a benefit gig for Paul last week at the Bloomsbury Theatre which was held so that Paul would not have to drop his appeal due to legal costs and spoke out, saying “This [verdict] must not be allowed to stand in law,” adding that he would continue to repeat Chambers’ message and face prison “if that’s what it takes”. Other celebrities in attendance were Al Murray, Rufus Hound, Katy Brand and Father Ted writer Graham Linehan.

It was made evident by speakers at the event that this was not a night of celebrating the original tweet with Al Murray re-naming it as “Save Paul Chambers from his own stupid destiny event” but that it was borne out of a communal feeling of wanting to protect our right to freedom of speech, civil liberties and to try and make the courts differentiate between what is a terrorist threat and what is a harmless tweet.

What do you think about the case? Would you stand-up and retweet Paul’s original twit even if it could have you thrown in the slammer? Would you go to prison for Twitter?