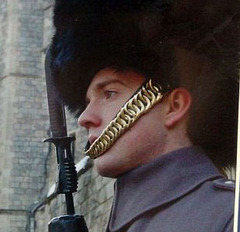 We often write about Facebook etiquette here and rule number one is: don’t insult your boss.

Rule number two is: especially don’t insult your boss if the Daily Mail can somehow get access to your profile, and your boss is the Royal Family.

An 18-year-old member of the elite Scottish Guards regiment has fallen foul of that golden rule by insulting the soon-to-be member of the royal family – Kate Middleton. Cameron Reilly kicked off on a public Facebook page after the future Queen of England did a half-hearted job of waving at him while she and William paraded past the Scottish Guard regiment

“Her and William drove past me on Friday and all I got was a s***** wave while she looked the opposite way from me, stupid, stuck up cow,” Reilly posted, according to the Daily Mail. “Am I not good enough for them! Posh b—-. Who really gives a f*** about her?”

We’re not too sure how The People newspaper and then the Daily Mail got access to Reilly’s Facebook page, but his comments have got him kicked out of the Guards’ parade on the day of the Royal Wedding.

It could be worse – people have been fired for less: see this case of car factory workers in Sweden: Fired for a Facebook comment – Swedish Volvo don’t see the joke & the story of this nursing student in America: It’s okay to post pictures of placentas on Facebook.. just don’t complain about work

REMEMBER EVERYONE: don’t bitch too much on Facebook – your name is attached to what you say.

One thought on “NO: Don't insult your boss on Facebook – Scottish Guard fired over Kate Middleton insult”