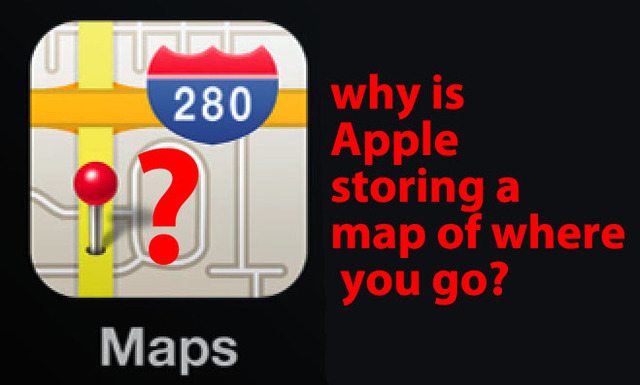 We’re all aware that the iPhone has GPS and that is is capable of tracking our movements, but few -read no-one – was aware that it actually logs and stores a track of where you go on your computer.

Turns out it does. All iPhones with iOS4 or later updates, store a little map of everywhere you go, and that map is transferred over to your computer when you sync your phone with iTunes.

The map is correlated with time to what the data researcher Pete Warden calls a “high degree of accuracy”. Warden, along with another security expert, Alasdair Allan discovered the file on the iPhone, and are presenting their findings at the Where 2.0 conference in San Francisco on Wednesday.

As with all data storage problems, the issue is not specifically with the data gathered – so what if you were in the office on Tuesday morning? – but with the potential use of it by malevolent other users – jealous husbands, stalkers etc. Or just anyone with access to your computer.

We’re all aware, and presumably comfortable with, the fact that iPhone photos are geo-tagged – you can see that easily on the albums tab which organises your photos on a map according to where you took them, but this is something else.

Walden and Alisdair have created an app which extracts this mapping file from iTunes and displays it graphically showing your movements on a map. Called The iPhone Tracker you can download it here and also read installation instructions.

Apple is famous for being tight-lipped about its processes but where sensitive user data is involved like this, it’s not just a company policy it’s a breach of trust with the consumer who didn’t consent to this.

Why on earth would Apple do this?
Warden and Allan hypothesize:

“It’s unclear. One guess might be that they have new features in mind that require a history of your location, but that’s pure speculation. The fact that it’s transferred across devices when you restore or migrate is evidence the data-gathering isn’t accidental.”

Here’s the ReadMe explaining the app below:

This tool scans through the backup files that are automatically created when you sync your iPhone with your OS X computer, extracts any recorded location information, and displays it as an animatable map.

It *doesn’t* record or share any of this information, it’s purely a tool for visualizing the data on your machine. It’s open source, so feel free to check the code and compile it yourself if you’re concerned.

The goal is to demonstrate how much data your iPhone is collecting on your movements, and how easy it is for any program on your computer to access that information. The coordinates and time periods are deliberately shown with low accuracy to make this application less useful as a snooping tool, but the underlying data has a lot more detail.