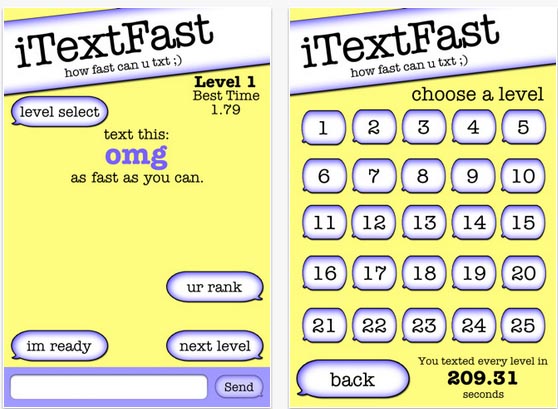 Do you get friction-burns from you touchscreen? Do your thumbs ache after a BlackberryMessenger conversation? Are you the fastest texter in the world?

There’s now an iPhone app to help you find out. iTextFast measures just how fast you type and compares you to the World Record holder, and everyone else who has entered speeds on the app.

Of course different phones let you text at different speeds – and stuff like autocorrect makes a big difference. Blackberries are notoriously faster than iPhones – hence Blackberry thumb syndrome where people give themselves RSI because they’re able to text so fast…

Best of all is the Swype keypad technology which means you don’t even have to lift your finger from the touchpad to type words out – just trace patterns on the screen.

The current Guinness World Record-holder used Swype to tap out the phrase below in 35.54 seconds:

“The razor-toothed piranhas of the genera Serrasalmus and Pygocentrus are the most ferocious freshwater fish in the world. In reality they seldom attack a human,”

Tips on typing faster on iPhone include: using it in landscape with your thumbs rather than in portrait with your index finger and a couple of little tricks like keeping the 123/ABC number button held down while using numbers so you can pop immediately back to the ABC keypad.