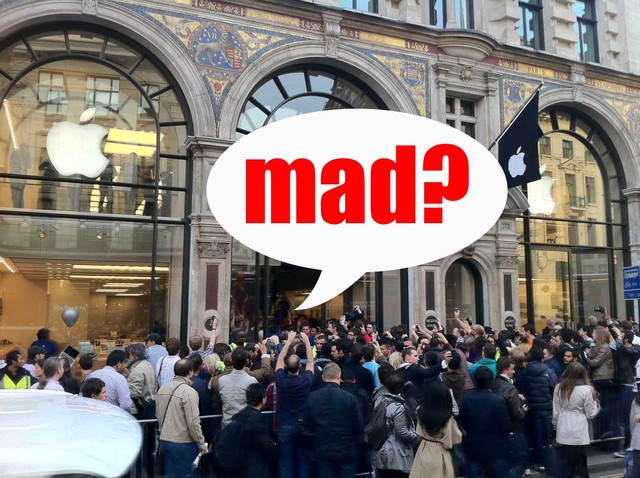 Some people are crazy. We know – we saw them queuing up outside the Apple store 10 minutes ago, frothing slightly, at the mouth.

Hundreds queued outsite the store in Regents Street, London despite the fact that within five minutes walk of the flagship shop, iPad 2s were sitting undisturbed on shelves in places like HMV, The Three Shop and PC World.

Inevitably, someone queued overnight, and lots of people pushed back and forward. There was even someone who already had an iPad waving it around filming other people going into the store to buy more iPads. Someone got thrown out. It looked like a photographer trying to break the line and get in early. (Doesn’t he know there are already lots of pictures of the iPad 2 on ShinyShiny?)

We asked TechDigest’s Gerald what he thought of the whole affair.

“I thought things were getting a bit rough when I saw someone coming out of the store with what i thought was blood all over his face. Unfortunately he just had bad skin.”

Any other comments Gerald?

No, he doesn’t have any more.

What’s new? People like to buy gadgets. I suppose it’s a good thing.