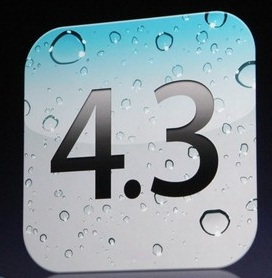 The new iMovie app for iPad looks goddamn sweet, and sure we fell for that other pretty own-brand Apple app – Garage Band – which lets you play beautiful music on a mocked up keyboard or drum set. But there wasn’t any hard-hitting software announcements at the Apple launch yesterday with iOS 4.3. It’s a update of nice tweaks.

Key features of iOS 4.3
– Optimised version of Safari, promises speedier browsing
– Wireless synching with other iOS4.3 devices nearby through iTunes Home (if your iPhone and your iPad are both connected to the same wifi network this will work and you will be able to synch and send media around between them)
– Personal Hotspot will finally let iPad and iPhone users share their 3G connection with gadgets nearby them.
– The ability to rotation lock the screen when you want to turn over the iPad
– Airplay has been improved – that allows you to send music over a wifi connection to speakers and in the new version will allow sharing media between apps – sending pictures from one app to another, for example.

The apps out are beautiful.

Beautiful toys though – the Garage Band app (out 11th March) mimics a guitar and a drum set. The “realism and expression” of the interface are incredible said the music VP demoing it. We believed him, it really sounded beautiful, and the screen was capable of distinguishing the weight of your touch. You could edit music, overlay tracks over each
other and basically create pop hits from just your iPad. Fire the rest of the band now. S4.99.

iMovie for iPad, was also seductive – this time for the visuals, the iPad is a natural screen for video editing – very intuitive, big and bright and in time for this launch Apple have packed in a whole load of extra features – most notably the ability to edit audio tracks.

Facebooth – a fun video effects tool for webcams – familiar to Mac Users will be on the new OS4.3 too as will support for FaceTime, the video chat function..

See some photos of the screen and apps below: