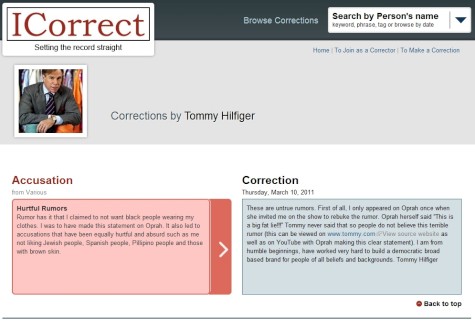 Now there’s an idea – a website dedicated to setting the record straight. iCorrect.com lets you right “obvious misinterpretations, misinformation and what some might call total lies”, according to founder Sir David Tang, whose previous ventures include founding retail chain Shanghai Tang.

It will cost you, though – $1,000 per year to use the site to right an unlimited amount of wrongs – but that’s a bargain compared to hiring a PR.

The site went live this month, with 35 ‘correctors’ already onboard. Corrections now up on the site includes Sienna Miller assuring us she’s not on Twitter, and Cherie Blair noting that she never went shooting with Col. Muammar el-Qaddafi’s son. And Stephen Fry has nothing against Catholics, he says on the site.

Tang told the New York Times it is his goal to have “big corporations like BP” using the site.

Having an outlet for celebrities to get their side of the story out is an interesting idea, but there’s no guarantee what’s being put on the site will be any more true than the gossip making rounds. Still, if it becomes popular it might be a very interesting site to browse.