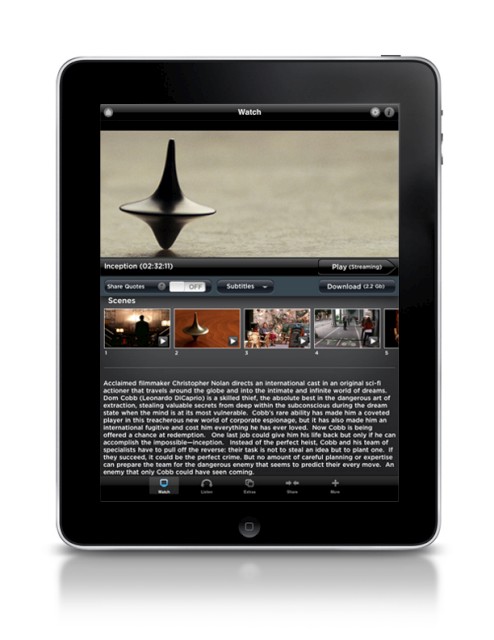 In what may well be the first of many, two Christopher Nolan films have been launched with special versions for the iPad, iPhone and iPod Touch. These special ‘App Editions’ will give the viewer full access to two films – Inception and Dark Knight – meaning you can either stream or download the feature.

There are also special features, photos, trivia and a range of language choices. You can download the initial apps free of charge (Dark Knight here, Inception here), giving you access to a few minutes of viewing and some of the bonus content. If you want to see the rest of the film it has to be paid for, using the in-app buying link.

While the films can also be bought via the iTunes Store, the App Editions are available to more countries and have more features. This includes the ability to post quotes during the film to Twitter or Facebook, and to browse the official fan streams. The ability to stream the films is a potential boost for this version, as the Dark Knight would take up 2.2 gigabytes of computer memory – not to mention being a bit of a wait unless you have a great broadband connection.

Warner Bros has said it wants release a range of films, old and new, as App Editions this year, meaning the company clearly sees a market for tablet and phone film viewing. Anything to make that commute easier, right?