With the strapline “First Date, Second Life” – PlzSayYes is a dating site with a twist – the twist being that instead of meeting and dating people in the Starbucks down the road, you get to meet them in the virtual world of Second Life.

But it’s not just avatar cuddles.. the idea is that after getting to know each other on Second Life you meet up with them in the real world and that love that started sitting on a virtual beach could end up in true love forever.

Research from Harvard suggests that people who get to know each other online first are more likely to have longer and more successful relationships. We got Jay Sumra the founder of PlzSayYes into the office to tell us why he thinks the unusual mixtures of web profiles, virtual dating and real life are a winning combination. 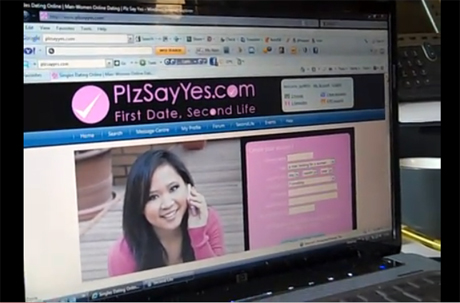 Why PlzSayYes and Second Life dating is better than normal online dating
1) You get to know people better if you *do* stuff with them. Jay told us that interacting with someone through avatars lets you get to know much better. It’s more visual and exciting than just virtual chat

2) Safer – instead of meeting up with someone after a few instant messenger chats, you spend more time online with them in Second Life so you get to know them better before making the jump to a real relationship.

Why PlzSayYes is better than just virtual romance
1) You know the people you are up for meeting up in real life. The idea is that you start off from the PlzSayYes site – which works like a normal dating site with pictures, info and descriptions about what people are up for. So you know that the avatar you are talking to is a 40 year old man from Nottingham and that he is up for a long-term relationship, making it easier to take the romance off-line when you decide you want to. It adds a useful touch of authenticity and reality to the Second Life play.

2) You know they live somewhere near you so a real-life romance would be possible
In Second Life the people you meet could be from anywhere – Brazil or Japan – so though the chemistry is all there, you may never be able to meet in the real world. With PlzSayYes you can filter people to just those from the UK.

A date in Second Life on the PlzSayYes island

A disco in Second Life on the PlzSayYes