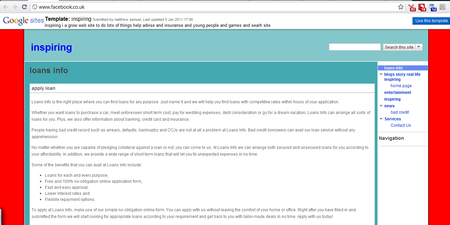 Looks like the web address facebook.co.uk was briefly hacked earlier today to display a spam page about loans. Screengrab above. Currently it’s showing a 404 “not found” sign. So was the domain hacked?

Of course, it’s not like Facebook.co.uk will cause much confusion with the real Facebook (.com) which looks dramatically different. But still, you’d think it was the kind of thing the company would have snapped up and would be keeping a firm hold on.

It’s interesting to note that Facebook.us, facebook.fr and facebook.de all redirect to the main Facebook site. Looks like the company managed to buy up those domains but something seems to be going wrong with the .co.uk version.

After a quick look-around on the WayBackMachine, it looks like Facebook.co.uk was first registered on 24th November 2005, though seems to have lain dormant since then with some changes in June/July 2009.

Does anyone know what the Google Sites Template thing above means?