Picassa and iPhoto have been doing it for ages, but finally Facebook, the world’s biggest photo site has introduced automatic photo-tagging. Facebook will start to use facial recogntion tech to recognise people in the photos that users upload…

Tag Suggestions as it is called will begin rolling out to U.S. users next week, according to the Facebook blog, and will be in UK sometime after that. It will affect the 99% of Facebook users who have uploaded at least one photo. 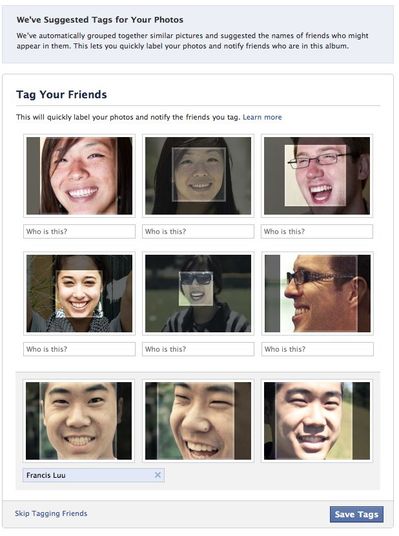 It’s aimed at making it easier for users to upload photos – Facebook say:
“While tags are an essential tool for sharing important moments, many of you have said tagging photos can be a chore. (Like that time you had to tag your cousin and her fiancé over and over and over again in 64 different pictures of their engagement party, and then go back and tag the guests.)”

There are various privacy controls:
1) If you don’t want to be automatically tagged in your friends’ pictures, you can switch it off, they’ll have to tag you picture by picture as they currently do..

2) Only people’s friends can tag them in pictures, Facebook won’t recognise the randomer behind you.