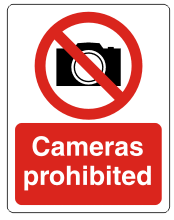 Earlier this week the Kuwaiti times reported that the Kuwaiti government has outlawed the recreational use of DSLR cameras in the country.

The Ministries of Information, Social Affairs and Finance collectively decided to ban the use of DSLR’s in all public places, unless you can prove that it is for journalistic purposes. In this bizarre announcement the government added: ‘What often happens is that a big black camera tends to worry people…Taking a picture of a stranger would seem much less of an issue if you were using a more discreet camera or even a cell phone.’ WHAT??
Personally I think if someone is sneaking pictures of you on their mobile phone, your going to be just as weirded out, but maybe that’s just me.

The British Foreign Office has now launched an investigation into the matter following media reports, but if you are planning on traveling to Kuwait anytime soon you might want to leave the DSLR at home.