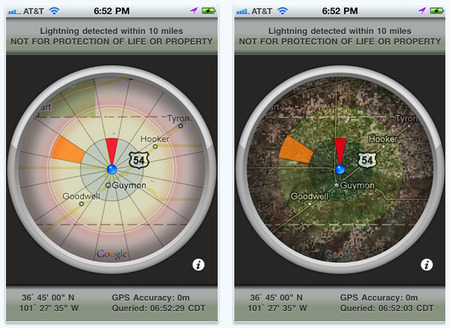 Some apps are random. This one is really random. A new app from Chicago-based app-makers AllisonHouse called BoltMeter does the unusual task of tracking lightening strikes. They describe it as a “new lightning detection display for iPhone, iPod touch and iPad”

Why do I think this is a bit ridiculous? Well do you really need an app to tell you when there’s been a lightening strike? It’s a bit like getting an app to tell you it’s dark outside or that it is raining. Surely you’d notice a lightening strike if it was close enough to be important to you, and if it wasn’t close enough for you to notice it, why would you care about it?

They say:
“BoltMeter is a new lightning detection display for iPhone, iPod touch and iPad. It is the only iOS application with a real-time lightning strike display utilizing a compass based system to provide up to the minute distance and direction information. BoltMeter is also the first iOS application that leverages the accuracy and efficiency of the United States Precision Lightning Network (USPLN). Lightning data for this application is only available within the Continental United States.

Okay maybe like Whoopi Cakes, this is one of those things that makes more sense in America. Maybe they have more storms over there.. and more need to track lightening strikes. Or something.

The information it is based on is only relevant in America, so I guess we Brits will never know just how useful this app is.