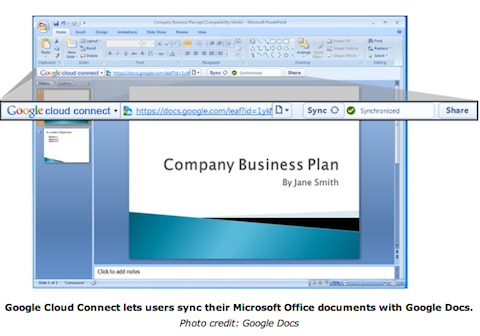 A few months ago after my hard drive died, I made the switch to Google Docs. At the time it was mainly so that I would never have to worry about losing all my work again. But now, having written well over 200 documents in it, I don’t think I will be making the switch back to Microsoft Office anytime in the foreseeable future.

However, the majority of people still using Office, if only for work. So to help encourage others to make the move over to Google Docs, they have launched the aptly named “Google Cloud Connect for Microsoft Office plug-in”. This simple plug-in effectively turns Microsoft Office into a front-end for Google Docs so that everything you do in Word, Excel and Powerpoint ends up synced and backed up in your Google Doc account.

This not only means you don’t have to worry about your work disappearing, but gives you the ability to collaborate with other Google Docs users. The only negative at the moment is that this plug-in only works on Windows.