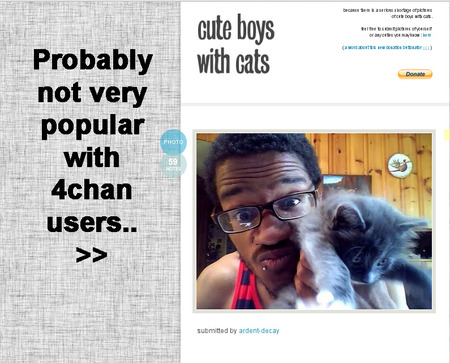 But even though it is by nature a random site, 4chan’s decision to attack the blogging platform Tumblr seems a bit odd. But basically, it’s all about the memes. 4chan is a bubbling forum board of filth, depravity and some great little memes. Lolcats come from 4chan, so do most things about Justin Bieber and rickrolling.

So not only do the kids on Tumblr steal 4chan memes and totally ruin their jokes, there’s also some good-old fashioned nerd hatred for people who are girls or hipsters, or just “non-techie”. A forum poster masterminded an attack called ‘Operation Overlord’ and they launched a Denial of Service attack on Tumblr yesterday.

However – Tumblr seemed prepared for the attacks, held out and even possibly counter attacked – both sites were running slowly yesterday.

This is probably exactly the sort of Tumblr blog 4chan hates: Cute Boys with Cats. Well, we’re sorry, but hipsters have to blog about their iphones, jeans and cats somewhere..