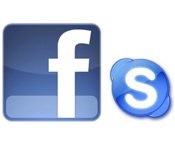 There have been rumors circulating since September that Skype could be integrated into Facebook, but now Tal Alter, a Facebook app developer has discovered a code called VideoChat in the API.

While working on his own app, the developer came across this code, and according to him it has “everything needed to introduce video chatting functionality.” What is even more telling, is that portions of the code mention Skype directly. Alter believes that this could mean it would soon be possible “to video chat with Skype users, or maybe even associate your Skype ID with your Facebook identity.”

There has been no denial or confirmation from Facebook, but could this just be one more element of their new messaging system, or is it a greater attempt to move all of our communication into their walled garden?