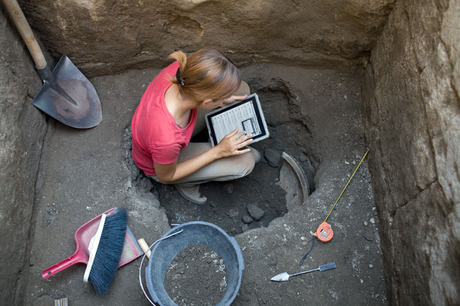 You’d think trowels would be more useful than tablet computers when you’re down a hole scraping volcanic dust out of a 2000 year old oven, but turns out that iPads have their value on archaeological digs.

Apple have devoted a whole page on their iPad site to how the iPad is getting used in Pompeii – the longest continuously excavated archaeological site in the world. Seems they’re useful for all sorts of reasons. Mainly as digital sketchpads… Apple proudly tells us:

“Rather than recording notes and sketches on paper, researchers at the site use iPad and apps to capture invaluable historical data faster, more easily, and with far better accuracy.”

Advantages of the Pad over conventional computers include:
– the long battery life of iPad makes it perfect for data entry during an eight-hour workday

– the ability to draw new information on photos with app iDraw. 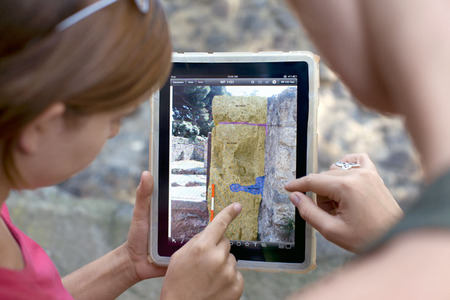 App iDraw seems like one of the most useful tools on the Pad, as it lets the diggers record what they see, before they uh, destroy it. It seems to be that’s what they do. Apple quotes Dr Steven Ellis – “We need to simply draw a lot of what we’re recording, because as we dig down through these layers we are essentially destroying the site. To destroy it is to understand it.”

Obviously it would be helpful if the iPad had a camera itself, but then we’re all going to have to sit tight and wait for iPad 2.0 in 2011.