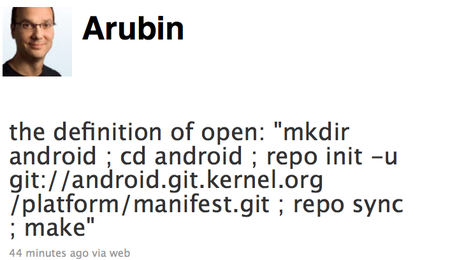 The best techie bitch-backs are written in code. Okay, it’s not exactly Lily Allen calling someone a fat cow, but Google CEO Andy Rubin has come back at Apple’s Steve Jobs’s big rant about Android handsets in one clipped tweet.

But this isn’t just any throwaway tweet, it’s the only thing he’s ever tweeted, marking a bit of a change of direction for the Google exec. It’s also impenetrable to anyone who isn’t a software engineer. But, as we understand it, he’s responding to Job’s accusation that the Android platform wasn’t really “open” by saying that – yes – it is actually open. He just says it in code.