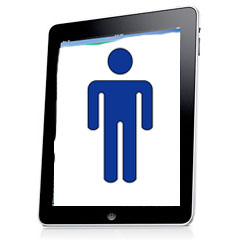 We know that iPad owners are part of a “selfish elite” [see this blog post] but are they mostly men too?

Interesting statistic from magazine AdAge – showing that men’s magazines have significantly outsold women’s magazines in the iPad app store. That’s the reverse of how sales go in the dead-tree publishing world where women’s titles sell a lot more than men’s.

Of course, the magazines that have gone straight to iPad have been the techier ones – Wired and Popular Science – while fewer mags about fashion and interior design have made the jump.

Still – big name women’s titles Glamour and Vanity Fair are on the iPad – and they just haven’t done so well.. Glamour sold 4,099 copies of its first issue on the iPad, and it was the big September edition. That’s equivalent to less than 1% of its newsstand sales. Vanity Fair averaged 8,925 sales across its June, July, August and September issues, equivalent to 2% of those issues’ print newsstand sales.

GQ’s iPad and iPhone edition averaged sales of 13,310 per month between April and August, equivalent to 7% of newsstand sales for those issues.

Figures for Popular Science are around 12% of its paper sales and Wired iPad app sales are about 38% of its newstand sales.

Is it simply that more men than women have bought the iPad?

About 5 million iPads have been sold in the US, but info isn’t available on things like gender distribution so it’s hard to prove anything.

Because we’re interested by the trend we thought we’d do a little survey here to get a feel for the gender balance … please let us know about your gender and your iPad.