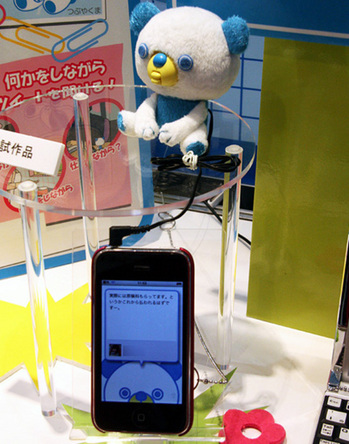 Some people like to read Twitter on the web, others prefer apps like TweetDeck or Seesmic, but surely the cutest way to receive updates from your friends on Twitter is to have a 10 inch desk-robot reading them out to you. Especially if that robot is the shape of a bear.

It’s from Japan, of course, where it’s called a “murmer doll” or Charatter in English. It uses a dedicated iPhone app to pull in your feed from Twitter then verbalises it in a sweet little robotic murmur. Okay so it only talks in Japanese so far, you can see it doing so here.

The manufacturers say this makes it easier to follow twitter while in the car or moving around the house, though of course, links won’t be the same.

Here’s what a sample ShinyShiny tweetstream would sound like….

“Our CMS and IE have formed an axis of evil :( <- I LOL'd. And winced in sympathy....A tag cloud of Ray Ozzie's memo - cool analysis http://bit.ly/dqZcWz...#subway #fail no other bread left than white.this is going to hurt!...7000 people out of power in Elgin #ChicagoStorm... Grrr my uggs have died and I want new ones uggs despite knowing they are the most impractical boots ever"

Just imagine that murmured by a robot.

We’re not sure if it speaks English or not and whether it can keep up with a really fast updating twitter, but it is just $25 here.