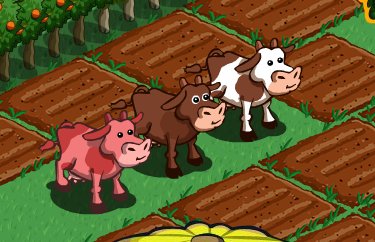 I always suspected that the farming on Farmville is easier than in real life. I have grown a few strawberries in my time and let me tell you it is greatly romanticised in Facebook game Farmville. (Though licking a computer screen would probably taste better than the scrawny pink and green things I forced out of the earth.)

That impression was confirmed today by reading a beef farmer interviewed by BEEF magazine. Apparently the cow-human realationship in Farmville is totally unrealistic:

“When I was in college, my roommates were addicted to [Farmville] and I admit I never understood why. To me, it was a far cry from reality. For example, you can own cattle, but you can’t harvest them for meat. You can have them graze your pastures, but they are really for decoration for the ever-popular strawberry fields. Simply stated, it just wasn’t my cup of tea.”

FARMVILLE – WHERE ARE THE ABATTOIRS?

(yes we did just pick this up from Saskia’s Blogs with Beef post) love it.