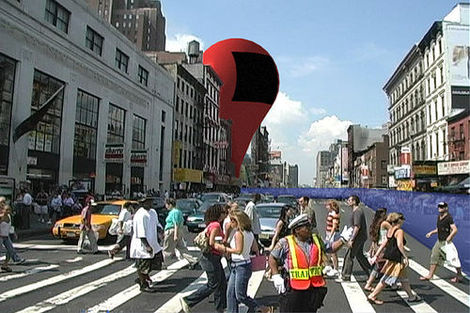 We do love Augmented reality a lot. As emerging technologies go, it’s probably one of the sexier ones, with the strong visuals and the general feeling that you’re in a computer game making it a bit more exciting than say the structured data web, another hotly tipped trend.

However Augmented Reality is still a little awkward in some respects. In terms of the AR technology – there are hurdles to overcome. We talked a bit to our favourite AR developer Howard Ogden of mobilistar and augmentreality and he mentioned a couple of the issues Augmented Reality has to overcome to go mainstream…

• Accuracy
– currently the margin of error is large. It’s 10 meters on today’s GPS systems and when you’re trying to superimpose an image on another at close range, that is not accurate enough. Techniques like skyhook and image recognition can be used today to mitigate this – in 2014 a new GPS satellite network will be launched giving a much higher degree of accuracy.

• Standards
– there are no open standards amongst the current crop of AR browsers which means you have to make a judgement call on the platform of choice. As in other walled garden scenarios, that means data can’t be shared between platforms

• Availability of AR capable devices
– AR is currently limited to smartphones right now as the complexity of displaying AR content requires numerous bits of smartphone hardware such as GPS,Camera, Gyroscope or Accelerometer + compass, 3D rendering capability and so on. This is found in only the latest handsets right now but the technology will filter down throughout the mobile landscape.

I’m looking forward to headpieces, head-up displays in cars and of course, AR-enabled contact lenses, but realise I may have to wait for a while….