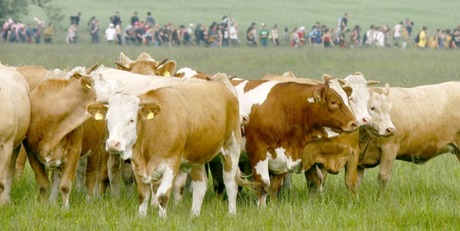 Qualcomm are better known for making chips for top smartphones than for cows’ intestines. That could be about to change.

The Internet of Everything aka the Internet of Things is where chips are embedded in everything from toasters to cars to CD players. With everything wired up to a chip, all these separate devices can communicate with each other and be monitored and controlled from the internet. Toasters aside, there are some quirker uses for it as well and at the Qualcomm conference earlier this month, I found out that one area where their pioneering chip technology is currently being used is in the stomachs of pregnant Japanese cows.

“Yeah – we’ve got very odd applications all over the world.” said Mark Carter a Director in Program Management at Qualcomm R&D.

Qualcomm is making the Radio Frequency Identity (RFID) chips that will be the basis of the internet of things. Their new family of everywhere chips – out by January 2011 – will be available for manufacturers to simply plug into their devices whatever they may be – kettles, or uh cows…

We pressed him to tell us about the Japanese cows.

“So pregnant cows are I guess very valuable, so the path of the cow and the amount of exercise and the food and things that they eat are very important to the health of the calf. So Japanese farmers want to do cow tracking..”

The deal with the RFID chips is that a manufacturer can rig them up to different sensors – testing anything from temperature, pressure, acidity or motion and then the chip can wire the data collected by the sensors back to a computer over the internet.

So with the cows the chip is put in a non-digestible ceramic cylinder with sensors built in and the cow swallows it. The famer could be measuring movement to see how much exercise the cow was getting, or acidity to measure digestive activity – all useful information in learning about the health of the cow and the calf.

Mark mentioned one other fascinating use for it (also in Japan, yes) which involved teaching Japanese adults how to look after babies. In this wacky-sounding project they were given a life-sized doll of a baby with sensors attached…. the doll provides feedback as to how well the adult is taking care of it.

“there’s another application which uses an anatomically-correct doll of a baby. They have these sensors in the baby and a doll that looks like a baby so they are using our module to send back cellular information over the wifi/Bluetooth to collect that data for mothers and fathers that are learning how to take care of an infant”.

Err, we’re not quite sure how that one works, but sound interesting.

Mark wouldn’t tell us the names of the projects because the technology won’t be official until a few months’ time, but promised that then details of interesting uses for it will be released soon.